Here are some great ideas that people have shared with me lately about raising their kids:

Email ThisBlogThis!Share to TwitterShare to FacebookShare to Pinterest
Labels: parenting 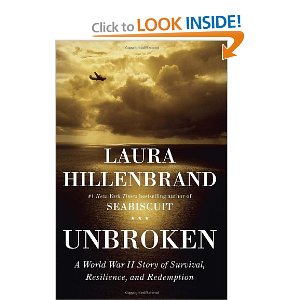 I recently read Unbroken and it was one of those books that I wished everyone was reading. I wanted to talk about this book the entire time that I was reading it. Micah got sick of giving him the play by play. The book is nonfiction, but does not have a nonfiction feel at all. It took the author, Laura Hildebrand, seven years to complete this book. You can clearly tell that she went into great detail and her research is superb.

For my generation, I felt like I was learning an entirely different side of history. When growing up, I felt like my history classes focused greatly on the Nazis during World War II, and not so much the Japanese. We would cover Pearl Harbor, but I couldn't figure out why the Japanese were in the war in the first place. This book explains that horrors that the Japanese inflicted on innocent people. But, Americans are not entirely innocent, considering Hiroshima.

When I first began reading this book, I thought that everyone should read it. I couldn't wait to pass it along to my mom, my granny, Micah, well anyone. The beginning details his running career and training for the Olympic trials. I thought this part of the book was inspiring. Louis Zamperini was rebel and getting into all sorts of trouble until he discovered running. He almost beat the 4 minute mile. Oh, to be that fast, what a dream.

The next part of the book details his career in the Army Air Force in Hawaii. I was shocked to learn the number of causalities from malfunctioning planes. You were taking your life in your own hands when you went up in the air. The planes were poorly built. It was like flying a lead balloon.

Then comes his struggle of being lost at sea in the Pacific ocean. This is a tale of great strength and the will to live. I still feel like everyone should read this book at this point.

The part of the story where he is in the POW camps is harrowing. It is a tale of great misery and cruelty on human life. This was very hard to read.  Now, I'm thinking my dad should read it. Granny and mom couldn't handle it.

This is one of those books I wanted to stay up all night researching Louis Zamperini's life. I wanted more. I went to work quizzing people if they had heard of Louis Zamperini's story. He's a remarkable man. I highly recommend this book, especially to those who grew up during that time.
Posted by Natalie at 10:00 AM 1 comment:

Hello, my name is Natalie and I'm addicted to honey. I want it on EVERYTHING. I make a smoothie every week day, and I've started adding honey to that. Then I'll have a bowl of Chex cereal and drizzle honey over it. When I get home from work I want to make a parfait with plain yogurt, granola, raisins, and you guessed it, HONEY.

One night for dinner, we had Honey Glazed Salmon. It's a really complicated recipe, you drizzle honey on the salmon and then grill it. Done and done. 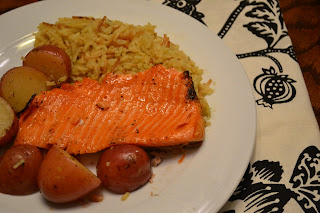 One night Micah made me a snack, which was honey on a tortilla. I caught him making himself one the other day. 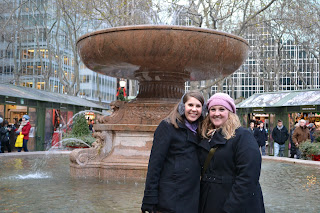 Shannon and I have been a few times to NYC together, and have always had a blast. This time was no exception. We stayed with April on the upper east side. Thank you April! Since we both have been we didn't have much on the agenda. So, I came up with a new agenda, CUPCAKES. Here you can find a detailed list of all the cupcakes we tried.

We spent time touring the city, and staying far away from crowds. The few times that we ventured into the crowds was NUTS. I do not advise visiting NYC after Christmas, especially if you are a first time visitor. The city was bursting at the seams with tourists.

We went to Canal Street, which is always an adventure. Thank goodness for Shannon's personal shopper, Monica. We tell her what we are looking for, and she leads us around to the back shops. Canal street was pretty particular about selling knock-off Louie's. They only had high end ones that run $200-300. Hello, I'd rather have a real purse for that price. We settled on Tory Burchs, I also scored some ear muffs. The ear muffs were the best purchase of the trip. 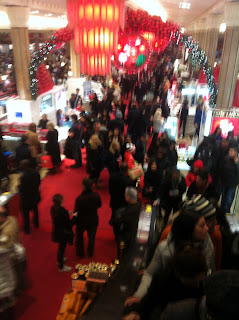 We attempted shopping at Macy's which was wall to wall people. I wonder how much merchandise walks out the door. Once you make it past the first floor, its much better. There's a line for the escalators, a line for the bathroom, fitting room, and checking out, forget about it. Shannon had the bright idea to go and see the light show on Saks 5th Avenue. Big mistake. The people were so thick you couldn't move. And the light show was a pretty big disappointment. We enjoyed the snowflakes much more a few years ago. 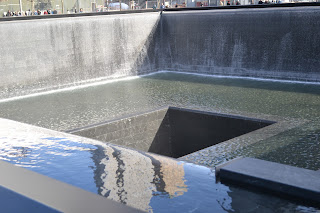 We had the chance to visit the 9/11 Memorial, although we had to lie our way in there. We did plan WAY ahead. I'm talking October, we signed up online for passes. The only day available was New Year's Eve. We had tickets, but didn't want to go then. So, we made it happen. The 9/11 memorial wasn't what I expected. I'd like to go back when they have the museum open.

We spent some time in Central Park, which is one of our favorite things to do. Except, this time it was full of people. We still were able to take some good photos. 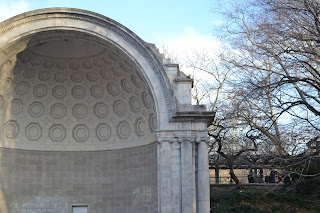 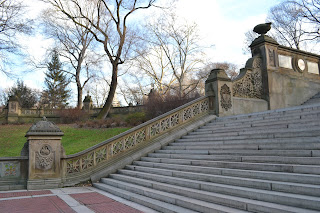 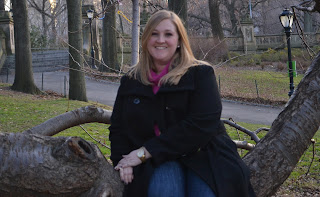 For NYE Shannon went out with April to a club and did a very New York thing. Since I was pregnant and couldn't enjoy and drinks I stayed home and rested. You have no idea how tired I was. Although, people were impressed with my ability to stay up so late, and march all over the city. 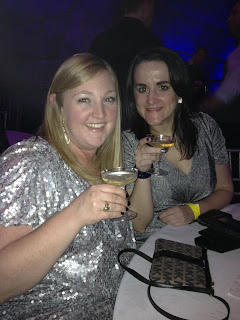 For my birthday, Shannon treated me to Cafeteria. It's was really good, I recommend the mac n' cheese. We were treated a little poorly and were skipped over a few times for a table. I think this was because we didn't buy drinks at the bar when we first arrived. Hello, I'm pregnant! No drinks for me. Often times people couldn't tell that I was pregnant because of my coat and scarf. I got the stink eye a lot from waiters and bartenders because I wasn't drinking. 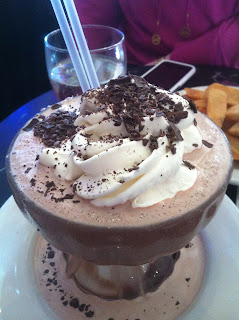 One of Shannon's favorite places in New York is Serendipity. She likes to get fries and a Frozen Hot Chocolate. We got a Frozen Hot Chocolate to share, and it was delicious. We were told over the phone that the wait would be 5 hours, so we marched over there to put our name down. Once we arrived, the wait was only an hour and half. We put our name down, spent some time at Bloomingdale's. We then waited about 20 more minutes, and we were in!  Serendipity is worth the wait. They take reservations so call ahead or go during a non-peak hour.

The weather was really nice, and we only had one cold day (my birthday!). I'm not sure when I will every be able to go back but, I hope it's sooner than later!
Posted by Natalie at 10:00 AM No comments:

I hope you enjoyed your holiday with your family! We had a great time visiting with our family and traveling around Texas. 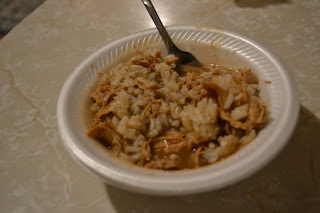 For Christmas eve eve we enjoyed Gumbo! My favorite! 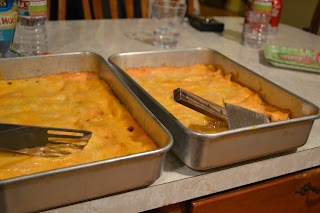 Every Christmas eve we go to candlelight service and come home to chicken enchiladas. After dinner we open presents with the extended family. This year the adults elected to have a Chinese Christmas. There were some great gifts for the girls apple TV, Chi hair dryer, Vera Bradley bags, and a Coach purse! I won the Vera Bradley bags, hooray! 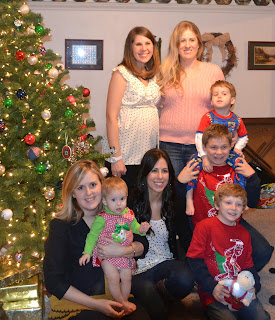 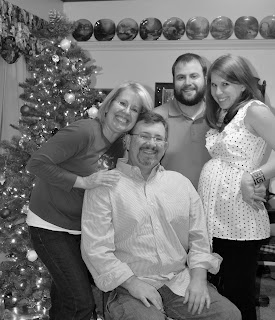 Christmas day is a little bit more relaxed. In the morning we open presents from my immediate family. Micah bought me an awesome Michael Kors watch, it's too big. So, I still haven't had a chance to wear it yet! We have a smaller traditional Christmas lunch and then Micah and I hop in the car and head to his parents' house.  There we have a traditional Christmas dinner. We also open presents with the Kemps. I got a beautiful Fossil purse. 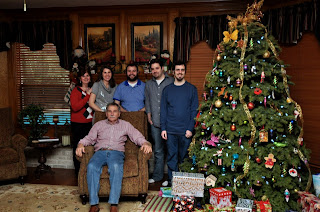 The Kemps minus Sean & Jen! 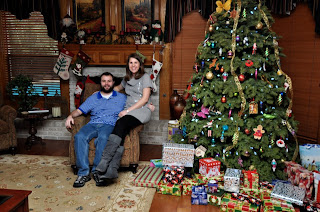 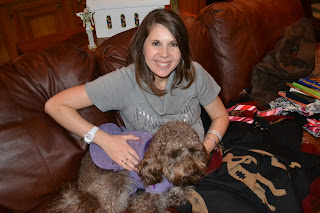 Me and Molly B,  my MIL's labradoodle. 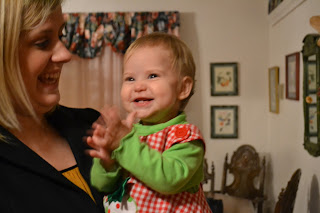 One of the cutest babies ever! 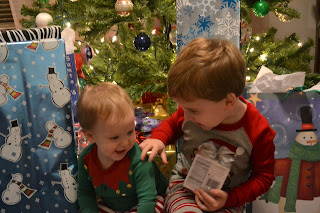 Big brother, Hudson, loving on lil' sister Harper.
I'm so thankful for my family and all of the wonderful presents. My family is so generous. Thank you! Christmas went by pretty quickly. Before I knew it, it was time to hop on a plane to NYC with Shannon!
Posted by Natalie at 10:00 AM 1 comment: