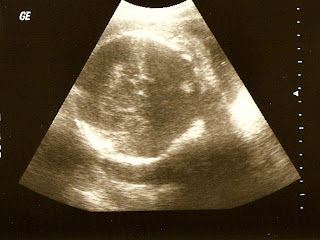 On Tuesday, I went to the hospital and had a external cephalic version (ECV). It was successful! The above picture is Jack in the head down position. This picture tells me little except that it's a picture of his head, I can't tell where it's positioned. Maybe you are a better sonographer than me!

What is it?
Externally turning the baby into the head down position. The doctor or midwife finds the baby's bottom and head. The doctor starts pushing the bottom first and then moves the head. My doctor ended up using his fists to get the bottom out of my pelvis. Baby's heart beat, your blood pressure, and contractions are continuously monitored. The doctor takes frequent sonograms.

When should I have it done?
I think most versions are successful between 37 and 38 weeks.

How successful is it?
According to Fit Pregnancy magazine it's about 58% effective. The Webster technique had a better success rate. I visited a chiropractor 9 times for the Webster technique and he wouldn't turn. When I was 37 weeks, we decided to start finding a doctor to turn him. We had a consultation appointment on Monday at 4:00 and did the procedure on Tuesday at 7:30 AM.

How long does it take?
Some of the videos on you tube take anywhere from 30 seconds to 2 minutes. Mine took about 30 minutes, and Micah estimates that it took 6-7 tries before he would turn.

Risks?
When we headed out for the procedure, our bags were packed and the car seat was installed. They tell you to plan for going into labor or having an emergency C-section. Neither of those happened to us luckily! Worst case scenario is emergency c-section because the placenta detaches. Other side effects are bruising.

How painful is it?
VERY. Some women elect to have an epidural during the procedure. Dr. Downey informed us of a study that says that the version can be more successful with an epidural, this could be in part that the doctor is willing to try more times and be a little rougher since the woman isn't in agony. Despite this information, I elected not to have an epidural. I was hooked up to an IV just in case of an emergency and was given a shot to relax the uterus. I do not like IVs! I concentrated on breathing deeply and not passing out. Micah held my hand or my foot. The nurse was very helpful in keeping me calm. I don't know how in the world I didn't end up with any bruising, since I bruise so easily. I was very sore the next few days, and was ready to block the belly from anyone touching me. I returned to work the next day.

Thank you Dr. Downey for turning Jack!
Posted by Natalie at 2:18 PM