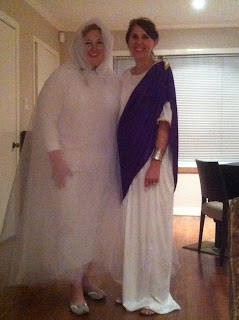 Micah had a bachelor party to attend in Houston, and I tagged along for the ride. This worked in my favor because I got to hang out with Shannon. When I arrived on Friday evening, I was a little worried she would want to go out. I had originally told her that I was going to arrive at 10-11, and when I showed up at her door at 9:30......Instead she needed help making Martha Stewart's no sew ghost costume. Except we totally had to sew, and there was lots of math involved. Don't you think it turned out cute?!  I'm a toga goddess. This was a spare costume I had in my closet. It has never been worn, and it fit. Golden!

I went down to College Station on Saturday, but that's all that I'll mention. I had a glorious time with Brandi and Shannon. It felt a little bit like a fish camp reunion because we were at Nick's tailgate most of the time. And we went saw Laura on the ramps at Kyle, and she shared some good news with us. 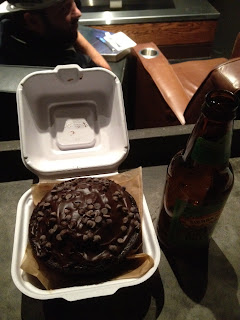 When Micah picked me up on Sunday he brought this luxurious "cupcake" with him. It was very tasty, and might as well've been called a mini-cake. Because it was HUGE.

On actual Halloween, we handed out candy for the first time since we've lived here. Usually we go over to the Gilmores, but Bryan was out of town.  Barley spent the entire night thinking he was getting visitors. Poor puppy.

How did you spend Halloween?
Posted by Natalie at 10:00 AM