We arrived home from Maui at 5:00 AM on Wednesday morning on little sleep and extremely jet lagged.  Micah got some sleep on the plane, I felt like I slept for about 10 minutes. It's a loooong flight and my foot was as fat as a sausage.

Nonetheless we had a hard time going to sleep last night. We probably went to sleep around 2 AM. I woke up this morning at 8:20. Quickly changed into my yoga gear for my class that starts at 8:30. Luckily my gym is so close, and takes about a minute to get there.

After yoga I went to Target for some grocery shopping and then later I went to Sprouts to get produce and meat. I'm really making life hard by going to 2 grocery stores in one day.


Work Out
Two weeks ago my knee became very sore after my yoga class. I don't think it was my yoga class, but maybe the running that I did the days before.  I've been taking it easy for 2 weeks. So sad. I ran 2 miles on the beach and felt pretty good. This morning when I woke up I felt a little sore, which is probably due in part to the flight.  Yoga is so awesome for stretching! The instructor always asks if anyone is hurting before she starts the class. I told her about my knee, and she checked in frequently with me during class. It was great. I'm feeling good now! 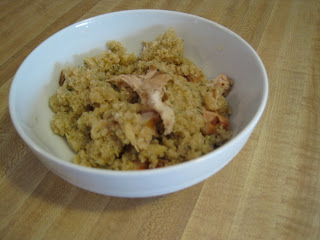 I made Lemon Chicken and Quinoa Salad. It was really flavorful. I doubled the lemon (on accident). I put 2 tbsp lemon juice in the pot to boil, and then added 2 more tbsp after the quinoa was cooked. It was pretty tasty this way! Quinoa didn't photograph well, it's tastier than it looks! 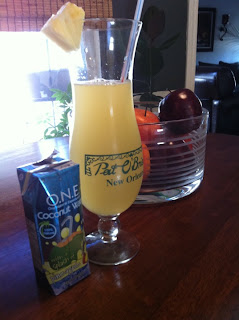 Since I'm still missing Maui I made a skinny pina colada, which is actually not that skinny. It is about 140 calories, but I made a double batch. It was a little strong to me, so I added more pineapple juice. I bought the coconut water at Sprouts. They have several different kinds. I've had coconut water out of a real coconut, and did not like it AT ALL.  But, this was actually tasty.
Posted by Natalie at 8:18 PM