This weekend Jennie and I headed down to Austin to run the Cap 10K.

To get ready for the race I decided to go for a run on Wednesday.  I set out to run 2, 3 mile loops. The first loop I was behind in my time, and was feeling a little beat down that I wasn't running fast enough. On the second loop I abandoned all plans of running the loop and decided that I would just finish out the 60 minutes. That's what my training scheduled called for anyways. I get home, and realized that I ran 3.4 miles on the first loop, and actually made great time!  After it was all said and done I ran 6.4 miles in 60 minutes. Hooray!

On Saturday night I had a Shiner, Sangria, and a yummy grilled cheese from Max's Wine Bar.  Not to mention the cupcakes we had as a 11:00 PM snack. Jennie bought us Hey, Cupcake. (She's the best!) They were even delicious the next day. This is the dinner of champions before a race. 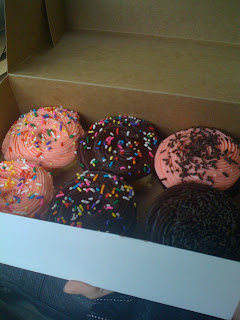 On Sunday, we wanted to get there early because there were 28,000 people running the race! This race is said to be the largest race in the state. I was so cold while we waited, but I warmed right up after I started moving. The race was rolling hills, but I felt great on the hills. Much better than I felt doing the Cowtown 1/2. I think that my spin class is helping with hills. The race went by fast because I was so focused on weaving through all the thousands of people. This race was well supported, I've never seen so many water stations. I made great time, and even had energy to sprint the finish. It was most excellent having a down hill on the way to the finish line.

I was so glad that I got to hear Florence & The Machine's "The Dog Days are Over" as I headed over the finish line. I rocked that song.

Thanks so much to Natalie for letting us stay in your lovely home!
Posted by Natalie at 9:22 PM