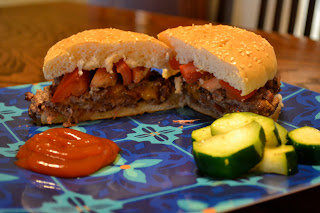 Last night I made hamburgers, and these were not your average burgers. No ma'am. They were stuffed with cheddar AND BACON. Yummy! We cooked them on the green egg and they were full of charcoal flavor. As sides we had zucchini and new potatoes. I sprinkled the veggies with Chachere's  and a little bit of butter. I wrapped the veggies in separate foil packets. The potatoes stayed on the grill for about 20 minutes, turn them after 10 minutes. The zucchini was on for about 7-10 minutes. 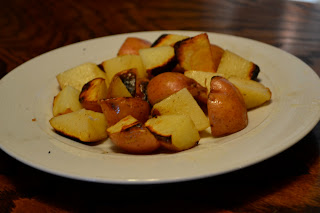 For dessert, I had TWO iced coffees. Micah had left over coffee from the morning. He stores his coffee in a super special thermos, and the coffee is still hot 8 hours later. I poured the coffee over ice and added hazel nut creamer and Kahlua. So, delicious. 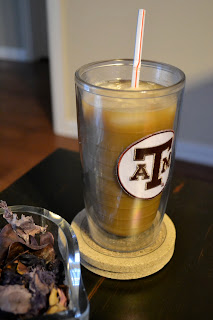 Go figure, I couldn't go to sleep. Micah and I stayed up and watched Sons of Anarchy.  I like this show, but Jax's character annoys me a bit. He's either aggressively hugging his "brothers" or aggressively kissing women. If he's not doing those things, then he's swaggering around the hospital. I really dislike his swagger.

Work Out
Nada. I made an executive decision and took the day off.
Posted by Natalie at 4:05 PM