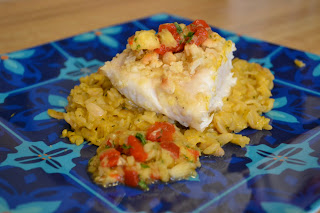 Dinner
I made macadamia crusted halibut with a pineapple salsa. I took the recipe from Sandra Lee's cookbook. This was my first time to cook halibut, and the meat is so white. I tis not fishy. It was pretty expensive, $23 per pound.  I only bought half a pound. I'm not sure if it was so expensive because I was shopping at Central Market or what. And, macadamia nuts are not cheap. The pineapple salsa was good even without onions and cilantro. I didn't have any cilantro, so I used basil instead.

Workout
I waited until 8:00 PM to go for a run to let it get "cool." Ha! It never cools down in Texas in the summer. I ran 5 miles, but I moved at a snail's pace. I was about half a mile from home, when a crow started to chase me. I was running and I would hear "caw-caw." I thought hmmm that's strange that crow sounds awfully close. When I got to the corner it started dive bombing me. I crossed the street screaming and almost threw myself down in the road.  The crow was still after me. I decided to run down the middle of the street to get away from the street. The crow came after me one more time, then finally left me alone. I strongly dislike birds.

A few years ago, Micah and I were driving along the road in Houston and a black crow was doing the same thing to a man running down the street. We felt so bad for him, because he was going to go home and tell his family a crow chased him and no one was going to believe him. I felt bad that we couldn't help him verify his story.

Be careful out there.
Posted by Natalie at 7:48 AM