Yesterday my dad and I went out for lunch at On the Border. I love it! I had cheese enchiladas, and I just won't think about how many calories were in that dish. Then we headed over to Irving to see the Genghis Kahn exhibit. I was the navigator. I thought my dad said 333 Macarthur, but he really said 3333. So, we got a little lost, but we eventually found it. We also discovered that Irving is a little shady. The Genghis Kahn exhibit was okay, there was even a mummy. The most interesting thing we saw were these Mongolians khoomei (throat singing). It is the most bizarre thing to witness. I kept looking around to see where the sounds were coming from, because there is no way that a human was capable to make those noises. The 2 performers were very handy on the fiddle and lute. 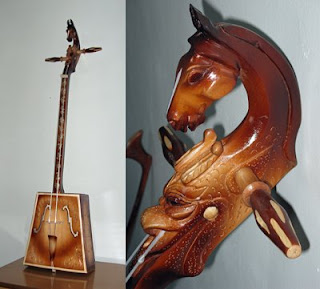 Workout
I have found the key to success. I will not eat a meal before I go to spin class. Yesterday, I ate half of a cliff bar. I felt really energetic during spin class. I also was sweating buckets. After class, I ran half of a mile until yoga class started. Since my muscles were already warmed up I thought yoga would be fun. So, I went to yoga class and Micah came back and picked me up in an hour.

Dinner
That means that I didn't start cooking dinner until 9:00. Who deserves a medal? This girl. I made Sandra Lee's Penne a la Vodka. It is really easy to make, and was very tasty. I suppose it would be difficult not to be good when it includes bacon and heavy whipping cream. I can count the number of times I've bought bacon on one hand, and this week I'm making 2 meals with bacon. I'm going to fatten us up! 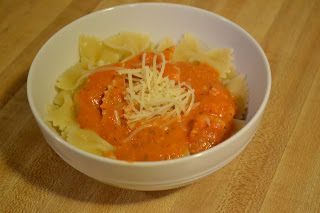