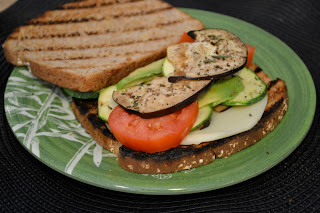 I saw this recipe in Cooking Light, and it looked delicious. I had a sandwich with eggplant on it in Boston, and it was good. I was willing to give eggplant another try. When I told Micah what we were going to have, and he was ready to head to Chick-Fil-A. I told him I would cut the eggplant thinly. I used my mandoline for the 2nd time, hooray. I cut the zucchini and eggplant thinner than the recipe required and cooked the veggies in a grill basket. I was excited to use my rosemary from my garden.  I did not bother with onions (of course!) and added sliced avocado. We had homemade guacamole and chips as a side. By homemade, I mean I mashed avocado with Pace Picante sauce. 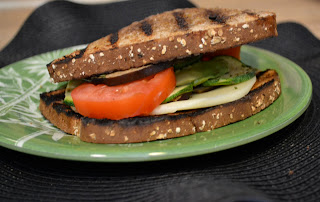 For lunch, I met Jennie at her mom's house in Plano. Her dad is in town from California, and it was great to see him. But, the star of the meet up was Kyle. Isn't he just precious? So cute, and very well mannered. Did I mention, he's also a genius? 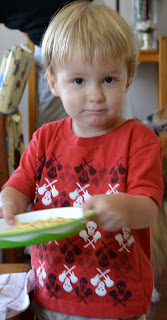 Oh, and let's not forget Cody, Peggy's 11 year old sheltie. He's so docile compared to Barley. Probably as hairy as Barley though! 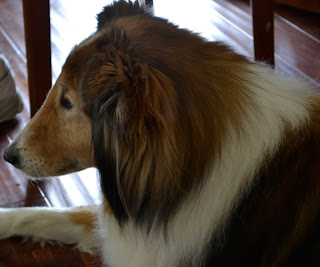 Later that night, I met up with Christine to see X-Men.  I really liked the cartoon when I was growing up, and have seen all the movies. I was glad Christine was fine with seeing this movie! Afterward, we went to Snuffers, and enjoyed their legendary cheese fries.  These cheese fries made me long for Dixie Chicken's cheese fries in College Station. Good thing football season is just around the corner. I also enjoyed two margaritas, yummy!
Posted by Natalie at 11:25 AM

Email ThisBlogThis!Share to TwitterShare to FacebookShare to Pinterest
Labels: eggplant